IPTV (Internet Protocol Television) is a system where a digital television service is delivered using Internet Protocol over a network infrastructure, which may include delivery by a broadband connection.

A general definition of IPTV is television content that, instead of being delivered through traditional broadcast and cable formats,is received by the viewer through the technologies used for

computer networks. For residential users, IPTV is often provided in conjunction with Video on Demand and may be bundled with Internet services such as Web access and VoIP. The commercial bundling of IPTV, VoIP and Internet access is referred to as “Triple Play” service (when these three are offered with mobility, the service is referred to as “Quadruple Play”). IPTV is typically supplied by a service provider using a closed network infrastructure. This closed network approach is in competition with the delivery of TV content over the public Internet, called Internet Television. In businesses, IPTV may be used to deliver television content over corporate LANs.

What Are The Advantages of IP TV?
Advantages of IPTV include two-way capability lacked by traditional TV distribution technologies, as well as point-to-point distribution allowing each viewer to view individual broadcasts. This enables stream control (pause, wind/rewind etc.) and a free selection of programming much like its narrow band cousin, the web.

IPTV covers both live TV (multicasting) as well as stored video (Video on Demand VOD). The playback of IPTV requires either a personal computer or a “set-top box” connected to a TV. Video content is typically MPEG2TS
delivered via IP Multicast, a method in which information can be sent to multiple computers at the same time, with the newly released H.264 format thought to replace the older MPEG-2

There are many media players To watch all iptv channels. Here is a Guide for some most popular media players to watch iptv Channels :

Fix problem iptv vlc change and how to do this?
Many people experience the problem of stopping or changing the channels after running for a few seconds on the vlc program, especially the channel playback file in ts format. This problem is not in all the operating files, but in some of them only.
This will explain to you how to avoid this problem and enjoy watching non-stop or change the channels permanently.

See the following picture to explain how to do this:

(2) How to watch iptv with simple tv player
Just download simple tv player install it on your computer/laptop Open it and press Ctrl+N or right click on screen -> File – Open URL and paste the stream address into the box. Download Link

(If you want to play ts link or m3u8 on Android , You can simply USE Android vlc Download if from playstore)

if you want to Play RTMP links in Android then follow the guide below.

1. Copy links from IPTV LINKS or any other simple tv m3u playlist sites.
2. Open notepad on your computer/Laptop and paste your iptv links as like this and click on file then save as m3u.

3. Save this as —-> “newtvplaylist.m3u” or any name u like with .m3u extension
4. Now transfer this “newtvplaylist.m3u” to your Android mobile using any filemanager
5. Now Download This Android iptv player Download Link once installed the the player automatically load your m3u playlist.
6. Open your Android iptv player and you will see your m3u playlist channels , Cheers 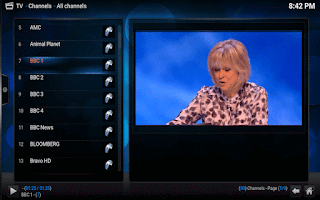 Open Kodi
Select SYSTEM
Select TV (or Live TV if you are on a version lower than 15.2 and if you are then consider updating)
Select General
Select Enabled
You will now see a pop-up saying that you have no PVR Client enabled. Select OK
Scroll down and select PVR IPTV Simple Client
Select Enable
Select Configure
In General select M3U Play List URL
Copy m3u playlist URL from HERE  or from any other site and paste it into the address section.
Select OK
Reboot Kodi
On your Home Screen you should now see TV (or Live TV if on an older version of Kodi). Open that to see the live channel list

How to upload playlist

There are two ways to upload user playlist

User may have any number of external playlists and only one internal playlist with live channels and one with VoD streams (films).

To upload playlist by link go to Content section of the app’s settings, choose External playlists subsection and click Add button bellow the screen. Enter desired playlist’s title and the link of your playlist in corresponding fields and press Save button. The playlist will be available on the Main Screen trhough separeta tile.

To upload playlist with non-permanent code go to General subsection of the app’s settings and pres Get code button. Non-permanent code can be used only 24 hours (or till new code is generated)

Attantion! For internal playlists you may use only m3u playlists, for external playlists m3u, xspf, asx and pls formats are admissible! More information about m3u format you can find here. Playlist file has to be encoded in utf-8 for correct uploading.

Upload to your Smart-TV

We use cookies to ensure that we give you the best experience on our website. If you continue to use this site we will assume that you are happy with it.OkRead more